Posted on Wednesday, September 7, 2011 by exiteuthanasia 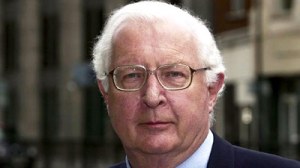 For those lucky enough to be able to afford the thousands of pounds required for an assisted suicide at Dignitas, Switzerland, there remains one extra hurdle that is sometimes difficult to surmount: a travelling companion who will accompany you and look after the day-to-day necessities. Many elderly folk have seen their nearest and dearest pre-decease them. Additionally, someone accompanying you to Dignitas is technically guilty of assisting a suicide. Enter Dr Michael Irwin.

Irwin, a retired GP, is also a former medical director of the United Nations. He has also worked for UNICEF and the World Bank and has never been shy to expose what he saw as wrongs, even among those in high places. It will not be the first time he will be interviewed by police over his part in someone’s suicide. He has openly admitted his help in a number of deaths, but always puts his patients before the limelight – something this Blog finds rare in doctors, especially ones wanting to make a name for themselves in the ‘movement.’

Irwin is an unadulterated hero. He has used his position wisely and skilfully. He has so far managed to stay just enough within the Crown Prosecution Service guidelines to avoid a prison sentence or even a successful prosecution. This is due in part to it being clear that his acts have been compassionate and unmotivated by self-interest.

He now plans to help a 91-year-old woman from Eastbourne, who suffers from severe arthritis, to travel to Dignitas even though she is not terminally ill.

Dr Michael Irwin, from Cranleigh, in Surrey, said he would help the 91-year-old who suffers from severe arthritis to travel to the Dignitas facility. He refuses to name the woman. “It’s her right to be anonymous,” he says. A spokeswoman for Sussex Police said officers would contact Dr Irwin. He was arrested for taking Raymond Cutkelvin, of London, to die at the
facility, but in June 2011 Director of Public Prosecutions Keir Starmer decided not to prosecute saying it would not be in the public interest.

A spokeswoman for Sussex Police said: “We will be getting in touch with Dr Irwin in relation to the report that he may be taking a woman abroad to be helped to die.” A spokesman for East Sussex County Council said, “There could be other ways of resolving this.”

In a separate story, The Director of Public Prosecutions Keir Starmer admitted that no
prosecutions have been brought for assisted suicide since new CPS guidelines were issued 18 months ago. But he said after personally overseeing all the unique cases since then, none have involved an individual who was “motivated by the prospect of gaining from the victim’s death. . . . Any inference that the Crown Prosecution Service has implemented a blanket policy of simply not prosecuting for this offence would be wrong.

“Each case is carefully considered on its own facts and merits. Prosecutors must decide the importance of each public interest factor in the circumstances of each case and go on to make an overall assessment. Assisting or encouraging suicide remains a criminal offence, and there must always be a thorough investigation into any suspected cases.”

Dr Peter Saunders, campaign director of the Care Not Killing alliance, yesterday said there was a “very real danger” that prosecutors would in effect create laws which ran “contrary to the will of Parliament”. He went on,  “The director of public prosecutions (DPP) has a duty to uphold the will of parliament but with no prosecutions resulting from the last 44 cases
he appears to be interpreting his own prosecution guidance very liberally indeed.”

The main cause of confusion seems to be how the word ‘assisting’ is interpreted. Clearly there is a very big difference between the sort of direct act that most people would call assisting a suicide – such as handing someone the pills and watching them die – and just getting on a plane to Switzerland with them. Although both are technically the same offence in law, there is the question of degree – one that is maybe lost on some critics.