Posted on Sunday, May 3, 2015 by exiteuthanasia 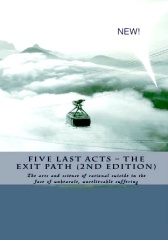 To keep pace with the changes in availability of helium, additional sections have been added to the books Five Last Acts II and Five Last Acts – The Exit Path. At over 400 pages, the first of these is one of the standard works on self-euthanasia (rational suicide for the terminally ill). The Exit Path is the extra large reference version, with hundreds more pages of explanations, comparisons, diagrams and notes. Both are considered authoritative works and used by many organisations, researchers and individuals seeking empowerment over their life and timing the manner of their own dying. After many requests, Exit’s notes from the Chicago NuTech Conference on self-deliverance have also been made available in print as Self-euthanasia Methods & Dialogues (a small booklet mostly of interest to people familiar with the main books.)

The additions to the new version of Five Last Acts II are primarily the extra pages examining nitrogen (pros and cons, in what ways nitrogen differs from helium, purchasing, and debunking myths, and relevant supporting citations from the journals). If you have the existing edition and understand the facts on helium and nitrogen, and have read our previous blog post warning about a certain helium manufacturer, you probably don’t need the new version. New readers can find the new edition on Amazon, or in bookshops given the time taken for ordering. The new version of Five Last Acts – The Exit Path, being a much larger reference volume (with 70 more pages, 822 in total), contains small updates to some chapters, extensive and detailed material on helium and especially nitrogen, expanded sections on other methods, and a section on self-deliverance and dementia. A colossal work that covers practically imaginable question.

Look out for the new books!
(Amazon links to all three books will appear on this page as they become available)

Note that the older, existing editions may be available on Amazon at a slightly reduced price for a short while. We remind readers that we comply with the law in all respects and ‘how-to’ information on rational suicide is not provided on this website. For Exit’s comments on self-euthanasia literature in the British Medical Journal, see here. This was in response to an article by Colin Brewer, the originator of the idea of self-euthanasia manuals. Brewer’s latest best-selling work, “I’ll See Myself Out Thank You” is also available on Amazon and reviewed in the coming edition of Exit Newsletter.

Note: a living will is best when tailored to your own country, state, and circumstances. It should preferably stand out, on strong paper. For these reasons we do not provide a standard download form. Please ask your nearest society, doctor or hospital. (Exit members are provided with a pack containing a choice of documents on joining.) You can also make your own living will (a very basic outline can be seen here); however it is best designed with expert help and also discussed with your doctor.

This entry was posted in living will, research, self deliverance and tagged new books, values histories. Bookmark the permalink.